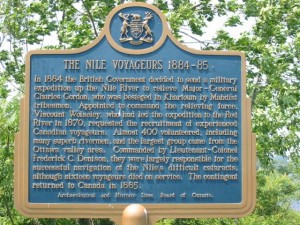 In 1884 the British Government decided to send a military expedition up the Nile River to relieve Major-General Charles Gordon, who was besieged in Khartoum by Mahdist tribesmen. Appointed to command the relieving force, Viscount Wolseley, who had led the expedition to the Red River in 1870, requested the recruitment of experienced Canadian voyageurs. Almost 400 volunteered, including many superb rivermen, and the largest group came from the Ottawa valley area. Commanded by Lieutenant-Colonel Frederick C. Denison, they were largely responsible for the successful navigation of the Nile’s difficult cataracts, although sixteen voyageurs died on service. The contingent returned to Canada in 1885.