Home » Traditions » The Decking of Colours in the Guards

The Decking of Colours in the Guards 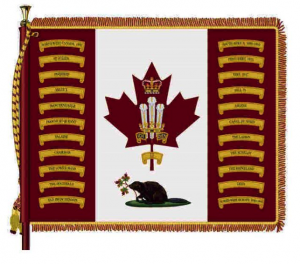 When the 1st Battalion, 24th Foot* returned from the Zulu War, in 1880, Queen Victoria placed a Wreath of Immortelles on the head of the pike of the Queen’s Colour of the Regiment to commemorate the Regiment’s exploits in the Battles of Isandhwana and Rorke’s Drift in 1879.

(later 1st Battalion, The South Wales Borderers, and now amalgamated into The Royal Regiment of Wales)
Around the same period of time and by 1890, the Brigade of Guards adopted the practice of “decking” the colours with laurel wreaths upon the anniversaries of certain campaigns, battles and actions in which the several Regiments have distinguished themselves.At one time, these wreaths were actually made of laurel leaves, and it was one of the duties of the Drum Major to manufacture them.Today they are made commercially.The wreaths are twelve inches in diameter, made of a plastic material wrapped around a wire frame.The wire frame has a loop that can be affixed between the finial and the pike on the Colour so that the wreath encircles the Colour.

The campaigns, battles and actions that the Brigade of Guards deck the Colours are varied from Regiment to Regiment.For example, the Scots Guards, Irish Guards and Welsh Guards only deck their Colours on the occasions that are also recorded in the Battle Honours emblazoned on the Colours themselves.The Grenadier Guards and the Coldstream Guards commemorate battles that are only recorded as lesser Honours granted for the Great War and for the Second World War that are shown in the Army List, but not displayed on the Colours.These two Regiments also include some events that are not specifically named as Battle Honours at all. Such anniversaries are, of course, connected with better known events. For instance, the Coldstream Guards deck their Colours on 9 October to commemorate an action at Houthulst Forest in 1917. This was part of the Battle of Poelcappelle, which they bear as a lesser Battle Honour, and which, in its turn, is covered by the Honour “Ypres, 1914, ‘17” which is inscribed on the Colours.

In Canada, the Governor General’s Foot Guards and the Canadian Grenadier Guards have decked the Colours with a wreath of laurel for many years. Both Regiments were officially authorized in March 1988 “…to deck their Colours with a wreath of laurel when carried on duty on the anniversaries of the dates most closely associated with their Battle Honours”