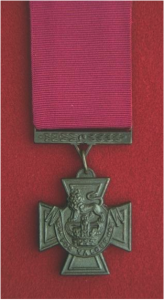 Just before Victoria Day weekend, the new Canadian version of the Victoria Cross was officially unveiled by Her Excellency The Right Honourable Michaëlle Jean, Governor General of Canada. The ceremony at Rideau Hall was attended by Prime Minister Stephen Harper, Vice Chief of the Defence Staff Walter Natynczyk and past recipients of Military Valour decorations.

The modern Canadian Victoria Cross replaces the British Victoria Cross introduced by Queen Victoria in 1856 and awarded to 81 members of Canada’s military forces in the course of various conflicts up to the end of the Second World War. Australia and New Zealand have also developed modern versions of the Victoria Cross.

Although the modern Canadian Victoria Cross has been in existence on paper since 1992, the first one was manufactured in 2007. Much thought went into the creation of this highest Canadian honour. The modern Canadian decoration retains a tangible link with the original Victoria Cross and its Canadian recipients, while forging a connection with the birth of our nation and with Canada’s present and future.

The design of the new Cross is slightly different from that of the original. To accommodate the official languages of Canada, the motto on the insignia has been changed from “For Valour” to the Latin “Pro Valore.” Another small change is the addition of the Fleur-de-lis at either end of the scroll bearing the motto, to accompany the traditional rose, thistle and shamrock, thereby establishing a link with the floral elements found in the Royal Arms of Canada. 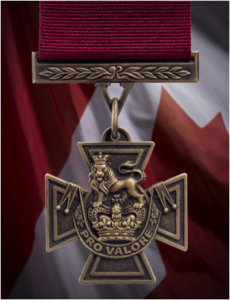 Some of the mystique of the original Victoria Cross is linked to the metal used in its fabrication. The British Victoria Cross is reputed to have been manufactured using bronze from Russian cannon captured at Sevastopol during the Crimean War of 1853-1856. While there is no solid proof of this, the story is taken to be true. What is certain, however, is that this original supply was exhausted by the end of 1914 and since then the majority of Crosses have been made from the metal of a pair of Chinese cannon of uncertain origin.

Bronze used in the original Victoria Cross was included in the manufacture of the Canadian decoration, to preserve the historical connection between the two. This was mixed with the bronze of one Confederation Medal – a commemorative medallion commissioned in 1867 to mark Confederation – and other metals mined across Canada. The result is distinctly Canadian.

The criteria for award of the modern Canadian Victoria Cross are identical to those of the British Victoria Cross and the Victoria Crosses of Australia and New Zealand: “The Victoria Cross shall be awarded for the most conspicuous bravery, a daring or pre-eminent act of valour or self-sacrifice or extreme devotion to duty, in the presence of the enemy.”

As can be seen with recent awards of the Victoria Cross for operations in Afghanistan and Iraq (to two British soldiers and a New Zealander), the standard is extremely high. Should a member of Her Majesty’s Canadian Forces meet the criteria, Canada is now ready to present its own Victoria Cross.

(images and write up courtesy of the Department of National Defence)