O’kill Massey Learmonth was born in Quebec City, Quebec on 20 February 1894. He enlisted in the Canadian Expeditionary Force (CEF) as a private soldier in November 1914, and was commissioned as an officer in June 1916. 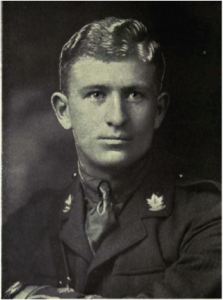 On 18 August 1917, Major Learmonth was serving as a company commander in the 2nd Infantry Battalion, CEF on Hill 70, near Lens in France. On that day a massive German counterattack on the Canadian positions caused his company to recoil momentarily. Learmonth threw himself into the defence by standing on the parapet of the Canadian trenches and hurling hand grenades at the enemy attackers, including German grenades that he actually caught and returned to their previous owners. Despite being seriously wounded, he maintained his exposed position on the parapet in order to personally direct the defence. When Learmonth was unable to carry on, he insisted on remaining and continued to give direction to his junior officers. Finally, he was forced to hand over his duties, and was evacuated to a hospital in the rear. Here Learmonth died of his wounds the following day.

For his bravery and leadership on this occasion, Major Learmonth was awarded the Victoria Cross posthumously. 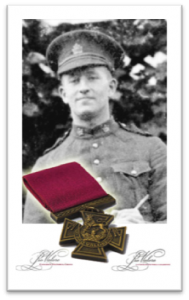 “For most conspicuous bravery and exceptional devotion to duty. During a determined counter-attack on our new positions, this officer, when his company was momentarily surprised, instantly charged and personally disposed of the attackers. Later, he carried on a tremendous fight with the advancing enemy. Although under intense barrage fire and mortally wounded, he stood on the parapet of the trench, bombed the enemy continuously and directed the defence in such a manner as to infuse a spirit of utmost resistance into his men. 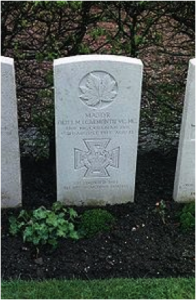 On several occasions this very brave officer actually caught bombs thrown at him by the enemy and threw them back. When he was unable by reason of his wounds to carry on the fight he still refused to be carried out of the line, and continued to give instructions and invaluable advice to his junior officers, finally handing over all his duties before he was evacuated from the front line to the hospital where he died.”

(images and write up from the DND and the GGFG)