The Drill Hall at Cartier Square

Since its construction in 1879, the Drill Hall at Cartier Square has been a landmark at the heart of Ottawa’s City Center. It can be found on the bank of the Rideau Canal where it meets Laurier Avenue. The Drill Hall is home for the Governor General’s Foot Guards and the Cameron Highlanders of Ottawa; two infantry regiments.

Where Ottawa City Hall is located today used to be an open field used for drilling and training by the two regiments. The building was designed by the legendary Thomas Seaton Scott, first Chief Architect of the Dominion of Canada, to house elements of the 43rd “Ottawa and Carleton” Battalion of Rifles (later named The Cameron Highlanders of Ottawa) and The Governor General’s Foot Guards (GGFG). 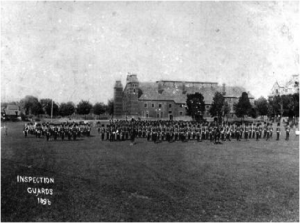 Today The Drill Hall remains home to the GGFG and The Cameron Highlanders of Ottawa. Both of these units are active components of Canada’s Primary Reserves, providing trained volunteer soldiers to augment the Regular Army in peace and war. Each day during the summer months, it is from the Drill Hall that the Ceremonial Guard departs to initiate the Changing the Guard ceremony on Parliament Hill.

The building is a rare surviving example of a military training facility built in the immediate post-confederation era when establishing a military presence and asserting the role of the federal government were important government aims. For over 125 years, The Drill Hall at Cartier Square has been at the centre of military mobilization and training for soldiers recruited from the Ottawa-Carleton area, overseeing soldiers deployed for service in: 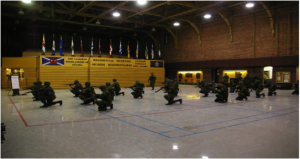 The Parade Square provides ample area for training at the section, platoon and company level and it is often loaned out to a wide variety of civilian organizations to hold large dinners and entertainment events such as the City of Ottawa Christmas Party, the Ottawa Heritage Ball, and the Ottawa Garrison Ball.
The Officers’ Mess is used by both the Governor General’s Foot Guards and The Cameron Highlanders of Ottawa. Originally constructed in the 19th Century for the officers of the Foot Guards, the mess was the scene of Sir Sam Hughes’ (the Minister of Militia and Defence at the time) declaration of war by Canada in 1914. In addition to an extensive art and regimental silver collection, the mess also houses the current Queen’s and Regimental Colours of both regiments.