The parade begins at the Cartier Square Drill Hall with the Drum Major, followed by the band, an officer carrying the Regimental Colours, the old guard, and finally the two divisions of the ‘new guard’. Turning North onto Queen Elizabeth Dr., the parade continues underneath the Laurier Ave. bridge and then turns left onto the ramp leading onto Laurier Avenue (Ottawa). The parade then continues with a right turn onto Elgin St, then ‘wheels’ onto Wellington before the parade arrives on Parliament Hill precisely at 10:00am. 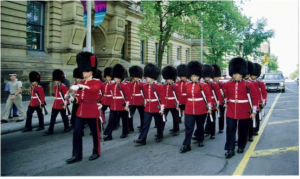 The parade marches onto the east lawn of Parliament, with the band centered at the northernmost edge of the lawn and facing south. The old guard marches to the west side of the east lawn and faces the east block, while the new guard marches to the east side of the lawn and faces west towards the old guard. After the old and new guards are formed from three ranks into two, and independently dressed off for proper alignment the two sergeants of the guard – commanders of the two divisions of new guard – advance to be inspected by the company sergeant-major. Following inspection, the number two division sergeant marches to his position while the number one division sergeant stands still. The new guard is then given the order “Get on parade”, at which point they advance to the tune of “The British Grenadiers” from the band, and form up dressed off the sergeants of the guard. The new guard’s persons and weapons are inspected by the company commander, and they are stood at ease.

Following the inspection of the new guard, the old guard is inspected. After this inspection, the sergeants of the guard and division seconds in command are ordered to ‘take post’- the sergeant of the guard marches from the right flank to directly behind the guard, while the second in command marches from the left flank to the right. The parade is then called to the present arms for the marching on of the regimental colours. With the colours marched on, the new guard advances at the slow march, ceremonially ‘taking up the ground’ from the old guard. The old guard and new guard salute each other at present arms, and the national anthem O Canada is played. Following this, the old guard commander presents the ceremonial key to Rideau Hall to the new guard commander. The parade is then formed into three ranks and marched off at the slow march, transitioning into the quick march. The order of march differs only in that the old guard is now at the rear, instead of between the band and new guard.